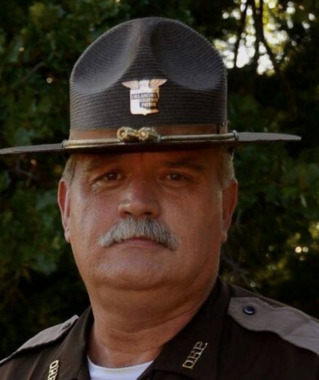 Back to Virgil's story

Virgil Eugene Housley Jr. (aka Gene) of Bristow, OK gained his wings on Sunday January 5, 2020 at the age of 55. Born in Muskogee, OK on June 7, 1964, Gene was the son of Virgil (Pa) Housley and Joan (Ma) Housley (Brintle). Gene attended Checotah High School and Connors State College. He began working as a photographer for the Muskogee Phoenix later transitioning to the Oklahoma Highway Patrol as Baker 465 working alongside his dad, Virgil (Baker 467). In 1990, when Virgil retired, Gene would receive the honor to wear Baker 467 where he would later retire from the Oklahoma Highway Patrol in 2019. Gene continued to work as a civilian with the department of public safety. He was a member of the First Baptist Church of Checotah. He enjoyed spending time with his family and friends, photography, music, being outdoors and putting a smile on everyone's face.
Gene was preceded in death by his niece, Abbygayle Icenogle. He is survived by his best friend, Carla Housley of Bristow, OK; children, Jessica and Jason McGuire of Cleveland, OK, Jake and Jacalyn Adkins of Oklahoma City, OK and Ruger Housley of Bristow, OK; parents, Virgil and Joan Housley of Checotah, OK; siblings, Brenda and Jim Icenogle of Checotah, OK and Julie and Kevin Smith of Checotah, OK; uncle to Frankie and Baylee; very proud pawpawpaw to Myles, Jacob, Avery, Gracie, Sawyer and Savannah; and his good boy, Duke.
The funeral service is scheduled for 2:00 p.m. on January 10 at the First Baptist Church of Checotah at 210 SW 2nd St. officiated by Anthony Vogt.
Funeral service arrangements are under the direction of Foster-Petering Funeral Home. Condolences to the family may be made online at www.checotahfuneralservice.com.
Published on January 8, 2020
To plant a tree in memory of Virgil Eugene Housley, Jr., please visit Tribute Store.

Plant a tree in memory
of Virgil

A place to share condolences and memories.
The guestbook expires on April 07, 2020.

Wendy
I can’t believe I have to say goodbye to you. You have made me laugh so many times, helped me with my photography and been a blessing in my life since I was 16. Until we meet again, fly high with the angels. I love you to the moon and back.
View all