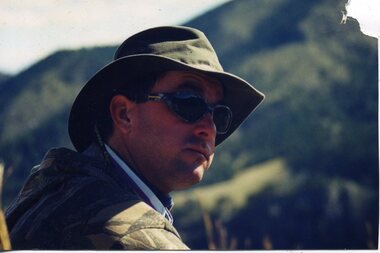 Back to Vernon's story

Memorial services for Vernon Leslie Martin, 52, of Cookson, Oklahoma are 10:00 am Friday September 30, 2016, at the 29 Eleven Church in Tahlequah. Officiating will be Reverend David Jones. Honorary pallbearers are Bo MacFadden, Eric Twyman, Buddy Clinton, John Denney, Jim Jolliff, Donnie Parris, Dean Martin, Tim Keller, Frank Conner, Jerry Stanley, Rusty Carroll, and Kathy Keller. Final arrangements have been placed in the care of Green Country Funeral Home. Online condolences for the family may be left at tahlequahfuneral.com.
Vernon was born on January 6, 1964, in Tahlequah, Oklahoma to Thomas Leslie and Earlene (Haddock) Martin. He passed from this life on September 26, 2016, at Woodall, Oklahoma.
A lifelong resident of Cherokee County, Vernon attended school at Lowery and was a 1982 graduate of Tahlequah High School. In 1982 he married his high school sweetheart. In 1985 their greatest achievement came along, Thomas. Vernon worked for Cherokee County Dist. II until he became employed at Muskogee Green Hill Cemetery where he was Cemetery Superintendent, completing nearly twenty years of service for the city of Muskogee. Learning about grief at an early age, he had a calling to his work at the cemetery. His job involved working with the public and he kindly and patiently listened to all of them.
If he wasn't with Regina or family, he was surely hunting or fishing. His love of the outdoors came from a long line of men who respect and cherished nature and everything in it. His life was one his entire circle of family and friends tried to emulate. He loved his wife, his son, his granddaughters, his mother and his entire family as we all want to be loved. He enjoyed every precious moment spent with his grandbabies, Taylor and Leslie. He wore many titles but his favorite job of all was being "PaPa".
Other titles, talents and accomplishments God blessed him with and not all may know are he loved to sing and whistle a tune, he played the guitar, a little fiddle, and played Snooks a nightly lullaby on his Native American flute. Wood carpentry also ran in his blood, he liked to profess our all mighty savior, he liked working with his hands on projects big or small. Whether it be building for himself or helping a friend he enjoyed it. He had also he ran a taxidermy shop. Vernon served 2 years on the Board of Director's for the Oklahoma Taxidermy Association. He was one of the State's first group, of six certified Black Powder instructors. He held the statewide backhoe operator's championship which was awarded during his years of service to Cherokee County District II. He was also a hunter safety instructor where several hundred youth were certified "Safe Hunters" in Cherokee County.
Vernon was preceded in death by his father Thomas Leslie Martin; his mother and father in law, Gabe and Billie Medlin; and grandparents, Cecil and Eunice Martin, and Beulah and Johnny Haddock.
He leaves behind his wife, Regina "Snooks" of the home; a son, Thomas Martin and wife Eleshea of Bartlesville, Oklahoma; two granddaughters, Taylor Faye and Leslie Denice; his mother Earlene Adams and step father, Kenneth Adams; three siblings, Michelle (Martin) Carrol and husband Russell of Keys, Oklahoma, Kenneth Mike Adams and wife Christi of Tahlequah, Oklahoma, and Shelly (Adams) Conner and husband Frank of Locust Grove, Oklahoma; uncle, Dean Martin and wife (Joy) of Tahlequah, Oklahoma; aunt, Carol Hughes of Park Hill, Oklahoma; and many nieces, nephews, extended family members, friends and loved ones. It was said, "Vernon was very straight-forward and blunt, tempered with kindness and thoughtfulness".
We don't know why death sometimes comes way too soon, and we are not to question why, for only He knows the hour in which He will come. It is our responsibility to be prepared.
Published on September 28, 2016
To plant a tree in memory of Vernon "Grizz" Martin, please visit Tribute Store.

Plant a tree in memory
of Vernon

A place to share condolences and memories.
The guestbook expires on December 27, 2016.

Restore the guestbook to view the 3 more posts by family and friends, and share a memory or message of condolence of your own.