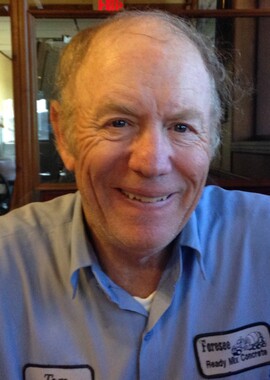 Back to Thomas's story

Thomas Allen Foresee, a Local Businessman, passed away January 11, 2020 in Eufaula, Oklahoma.
Thomas was born to Thomas Gordra and Bennie Dean Foresee on September 19, 1949 in Muskogee, Oklahoma. Thomas attended Elementary School at Millwood in Oklahoma City, Oklahoma until his parents moved to Eufaula in 1960 during the construction of the Eufaula Dam. His father, "Red" Foresee established Foresee Ready Mix Concrete at that time. Thomas attended and graduated from Eufaula High School in 1968. Thomas attended OSU/Okmulgee where he received a degree in Concrete Construction. Thomas was the President of Foresee Ready Mix Concrete in Eufaula for many years in Eufaula and retired in April of 2019.
Thomas married Dayna Elaine Clawson on August 15, 1981 in Eufaula, Oklahoma where they raised their four children.
Thomas served as Fire Chief for the Eufaula Fire Department for many years and retired after 30 years of service. He was a member of the Eufaula Chamber of Commerce, Eufaula Masonic Lodge #1, McIntosh County Shrine Club, Eastern Star, Order of the Amaranth Lion's Club, Elk's Lodge, Bedouin Temple, The Scottish Rite, Oklahoma Ready Mix Concrete Association and The First United Methodist Church of Eufaula..
Some of Thomas' hobbies included water skiing, snow skiing, boating, arrowhead collecting and spending time with his friends and family. He will be dearly missed.
Thomas is survived by his wife, Dayna Foresee; four children, Jacie (Jason) Cook of Inola, OK, Crystal (Tyler) Warren of Coweta, OK, Alicia (Matt) Collins of Tulsa, OK, and Jeremy Foresee of Eufaula, OK; seven grandchildren, Taylor Cook, Cole Cook, Hayden Warren, Lyla Warren, Colby Warren, Landon Collins, and Eva Collins; one brother, Robert (Betty) Foresee of Bentonville, Arkansas; two sisters, Pat (Jack) Farmer of Fayetteville, Arkansas and Kathy (Jack) Turner of Eufaula.
Thomas was preceded in death by his parents, Thomas G. and Bennie D. Foresee; one sister, Oleta Richie of Lead Hill, AR.
Funeral services are pending at this time.
In lieu of flowers, memorial donation may be made in his name to the ALS National Headquarter, 1275 K Street NW, Suite 250, Washington, DC 20005. Phone: 202-407-8580, Fax; 202-464-8869.
Published on January 15, 2020
To plant a tree in memory of Thomas Allen Foresee, please visit Tribute Store.

Plant a tree in memory
of Thomas

A place to share condolences and memories.
The guestbook expires on April 14, 2020.

Kenny and Cathi Velvick
Tom was a good man and a great boss. Have too many memories to post. He will be missed.
View all