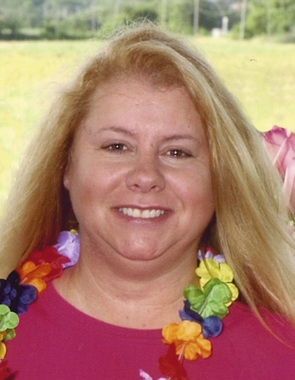 Back to Sherry's story

Sherry Leigh Livingston, 55 of Fort Gibson, passed away peacefully with her family by her side Thursday evening, December 5, 2019. She was born June 10, 1954 in Houlka, MS to James Harmon and Kathryn (Cordell) Cookson. She grew up in Fort Gibson and graduated with the Fort Gibson Class of 1982. She continued her education and became a dental assistant.
On July 3, 1987, Sherry married the love of her life, Jerry Lee Livingston, Jr. at her sister, Darlene's home. Together they have shared over 32 years of marriage together. They are members of Cornerstone Church in Tahlequah, Oklahoma.
Sherry's hobbies included gardening, traveling and she loved spending time with her husband, boys, new grandbaby and Claire, her four-legged baby. She was especially proud of her new grandbaby Odin, who was born just 6 weeks ago. Sherry had a heart of gold and would help anyone in need.
She was preceded in death by her father, her mother-in-law, Grace Slader; and her father-in-law, Jerry Livingston Sr. Sherry is survived by her husband, Jerry Lee Livingston, Jr; son, Josef Livingston of the home; son, Jakob Livingston and his wife Brittany, of Fort Gibson; mother and father, Kathryn and Bob Cookson of Fort Gibson; sisters, Darlene Aldridge and her husband Jeff of Alton, IL, and Robyn Boswell and her husband Ronnie of Muskogee; brothers, James Harmon Jr, Steven Harmon and his wife Shelly, Donny Harmon and his wife Sherri, and Patrick Harmon and his wife Edie, all of Fort Gibson.
Sherry's family will receive friends 5:30-7:30 p.m. Monday, December 9, 2019 at Cornerstone Funeral Home.
A celebration of Sherry's life will be 3:00 p.m. Tuesday, December 10, 2019 at Cornerstone Funeral Home Chapel with Pastor Bobby Musgrove officiating. Serving as pallbearers will be brothers, James Harmon, Jr., Steven Harmon, Donny Harmon, and Patrick Harmon. A private family interment will be at Citizen's Cemetery.
Funeral services are under the direction of Cornerstone Funeral Home, 1380 N York Street, Muskogee, OK. Condolences may be made to the family online at www.cornerstoneofmuskogee.com
Published on December 8, 2019
To plant a tree in memory of Sherry Leigh Livingston, please visit Tribute Store.

Plant a tree in memory
of Sherry