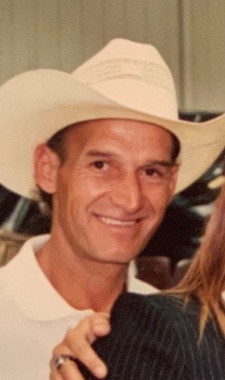 Back to Morgan's story

Morgan Ray Chambers, 55 of Warner, OK rode his last ride on Tuesday February 11th, 2020. Morgan was born on July 8th, 1964 the third child to Jack and Louise Chambers. From a young age it was evident that he was fond of 3 things: rodeo, family, and mischief. His mother often told the story of little Morgan's being the 1st in his family to be baptized at the age of 7 at First Baptist in Warner, OK.
During Morgan's youth he could be found at the local rodeo on the back of a bronc or bull; chasing the next go-round and all the pretty girls. Here he found great success, amassing an array of trophies and buckles to show for it. His best prize though came in the form of his high school sweetheart, Patsy Ann Murphy. They married young and quickly became parents to their daughter, Andrea.
Cowboy roots run deep in the Chambers family, and Morgan was no different. His father instilled in him the value of putting in a hard day's work with your hands, this skill served him well in his many years working a large cattle ranch in McAlester. Of all his achievements, Morgan considered not only participating, but winning All-Around Cowboy at the McAlester Prison rodeo to be chief. It is still unknown if Morgan was truly scared of anything, besides possibly missing out on a good time. What is known though is, he never met a stranger he wouldn't talk to or help out. You could always expect a big goofy smile and a warm greeting from Morgan when you encountered him. That cowboy and that smile will be sincerely missed by all who loved and knew him.
Morgan was preceded in death by his daughter, Andrea Henderson. Father, Jack Chambers, and mother, Louise Chambers. He is remembered by grandchildren, Racee, Cruz, and Revyn Henderson. Daughter, Ashley and her husband Josh Rogers and grandchildren Ty and Trinity Mullen. Sister and Brother-in-law Tim and Darlene Chambers-Elam. Brother and sister-in- law, Jack Wade and Susie Chambers. Sister and brother-in-law, Stella and Kenny McCoy. Special Aunt Prescilla Parent, Special Uncle Lonnie Chambers, Special Cousins Maggie Fletcher and Bobbie Edwards, as well as many nieces and nephews, special cousins and beloved friends.
Services will be held at 2pm Monday February 17th at Warner first Assembly of God with Reverend Joshua McElyea residing. Pallbearers for the services include: Travis Parent, Jeff McElhaney, Chooch Coffman, Colton Purdom, Josh Duke, Justin Crow, and JC Stroud. Honorary pallbearers include: Lonnie Chambers, Bobby Edwards, Gene Jones, Rodney Brown, Trevor Lyons, and Jamie Hibbs.
Funeral Services provided by Lescher-Millsap Funeral Home, Muskogee., OK.
Published on February 14, 2020
To send flowers to the family of Morgan Ray Chambers, please visit Tribute Store.

Send flowers
in memory of Morgan

A place to share condolences and memories.
The guestbook expires on May 14, 2020.

Kevin Kilpatrick
I went school with Morgan an worked with him at the feed store with him an his dad . Spent many a night sewing sacks as he filled them . I think we always had a nip hid around that feed mill . Morgan would give you his shirt off his back . He was one to love a good time , as we all did, Morgan you will be missed .
Dianna Pevehouse
Morgan was a very good friend to my brother Rodney Brown , you will be greatly missed praying for Morgan family .
Vickie Mendenhall
Morgan was a very special person to me. We new each other for year's. He always showed respect & could always make you laugh.
He had the prettiest smile for a man . I have a beautiful wallet he made for me yrs ago. Its pure leather with my name engraved in it. Itll even be more special now. He also made me a beautiful belt & buckle with my name on it. I wore it out i loved it so much. You will be dearly missed Morgan. RIP buddy.
Kayla Marie Hudson
Morgan Chambers was the love of my life. He was the most honest person I knew he had his he had his flaws but don't we all he was a good man I love you dearly he was the most honest person I ever met he couldn't tell a lie that telling the truth.
Gina
I love you my sweet friend. I will miss you and think of you often. RIP until we meet again.
Stephanie Calvert
Morgan was a very very good friend. I have known him for several years. Mischievous yes he was. But oh what a friend what a heart. I know many many people who knew him well they all would tell you the same thing, a true friend with a true heart. You will be missed by many Morgan forgotten by no one. R.I.P. God Bless the Chambers family.
Cindy McIntosh /Mary McIntosh
Morgan and my brother, Rob McIntosh were friends . My thoughts and prayers to the family
Mary Meschberger
Will miss him he was so ornery on the school bus I'll always remember that
Loria Flynn
Um sorry for your great loss he was a wonderful an and friend even through I hadn't seen him and most of your family in yrs. But I know his raiding in heaven with the rest of your family.
Janet Gray
Morgan was a good guy and I never seen him not smile and laugh he put a smile on my face just seeing him smile and laugh he had abig heart full of love for everyone.he will be very missed.RIP Morgan
Kelly Elerick
Morgan was always friendly to me. He was a tough guy but had a gentle side as well. He will be missed.
View all