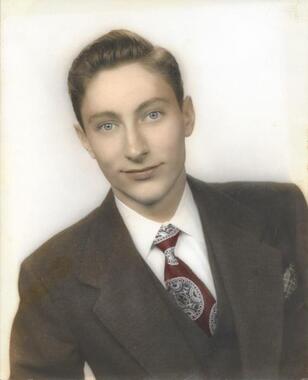 Luckey J Walton, Jr., age 89, passed away on July 26, 2016 in Tulsa, Oklahoma. Born September 12, 1926 in Muskogee, Oklahoma to the late Luckey J and Cecile Faye (Cartmell) Walton.
Luckey grew up in Muskogee, Oklahoma and attended Jefferson Elementary, Longfellow Grade, West Junior High and graduated in 1944 from Central High. He was active in the Muskogee Chapter of DeMolay where he became the Master Councilor. Luckey attended Texas A & M and then joined the Navy as an Aviation Electronics Technician. After discharge from the Navy, he attended Muskogee Junior College and received his BS degree in Management at The University of Tulsa. He was a founder of Episilon Mu Chapter of Kappa Sigma at TU.
Luckey's employment included the First National Bank of Tulsa, Oklahoma; Griffin Grocery Co in Muskogee, OK, and Hunt's Department Store in Muskogee and American Airlines. Luckey moved with American to New York where he met his wife, Pat Hyde. They married October 21, 1960 and lived in the area until Luckey was transferred back to Tulsa. He retired after 35 years in 1986 from American as the Passenger Refund Service Manager.
Luckey is predeceased by his parents; daughter, Teresa Kersey and great-grandchild, CJ. He is survived by his loving wife of 55 years, Patricia (Walling) Walton; son, Warren Walton (Tammy); daughter, Vickey Walton Roth (Peter); grandchildren, Jennifer Mathews (Jason), Crystal Cross (Michael), Teara Firor (Joshua), Lyndsey Kersey, Wyatt Walton Roth and Alexandra Walton Roth;15 great-grandchildren.
Funeral Service 2 p.m., Saturday, July 30, 2016 at Moore's Southlawn Chapel, 9350 E. 51st, Tulsa, OK. Interment will be 11 AM, Monday, August 1, 2016 at Fort Gibson National Cemetery, Fort Gibson, Oklahoma. In lieu of flowers, Luckey has asked that you donate to Folds of Honor (5800 N. Patriot Dr., Owasso, OK 74055, Ph. (918) 274-4700). A charity for the children of deceased veterans. Moore's Southlawn 918-663-2233 share memories at www.moorefuneral.com
Published on July 28, 2016
To plant a tree in memory of Luckey J Walton, Jr., please visit Tribute Store.

Plant a tree in memory
of Luckey

A place to share condolences and memories.
The guestbook expires on October 26, 2016.