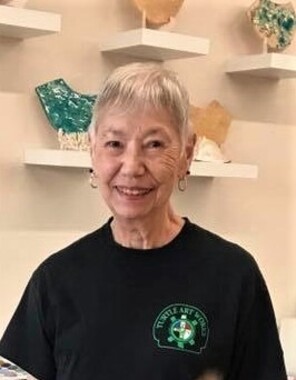 Back to Janet's story

Janet L. Smith, 76, of Wagoner, passed away on January 3rd in her home surrounded by family. Family and friends will gather for a memorial visitation from 4:00 - 6:00 pm Friday, January 10 at Mallett Funeral Home, 417 East Cherokee Street, in Wagoner. Janet was born in Tahlequah to John and Lucille Lamon on May 14, 1943. She graduated from Okay High School in 1961. She married William L.'Bill' Smith on October 19th, 1963 in Stillwell. She received Bachelor's degree from Northeastern State University and Master's degree from Emporia State University. She worked as an Art Therapist with Cherokee Nation and Indian Health Services. She was an active member in the Wagoner and Okay community. She received awards and accolades for her work in Art Therapy and as a Native American Artist. Janet is preceded in death by her father, mother and her youngest brother, W.A. Lamon. Janet is survived by her husband, two children, Michael and Charles Smith, two brothers, Robert and Johnny Lamon, four grandchildren Lamon, George, Chloe, and Joseph, and several nieces, nephews, cousins and loved ones. The family asks in lieu of flowers, please donate to the American Legion Auxiliary Post 153 or the Wagoner Community Outreach. The family of Janet wishes to extend their sincere thanks to Tahlequah, Wagoner and Okay community members
Published on January 6, 2020
To plant a tree in memory of Janet L. Smith, please visit Tribute Store.

Plant a tree in memory
of Janet

A place to share condolences and memories.
The guestbook expires on April 05, 2020.

Andrea Smith
My heart is broken, not for Aunt Janet, for I know where she is, but for my Uncle and Cousins and my 2nd Cousins..and for her Brothers, Sisters-in-law, Nephews, Nieces and all those of us who were Blessed to spend time with her. What a wonderful impact she has made on this Mother Earth and what a glorious celebration Heaven must be having because of her presence..Every memory of time spend around her was the greatest to me, and I sat in awe most of the time, just being quiet so I could hear her speak. If I had to choose one word to describe such a Beloved one as she, it would have to be 'GRACE'...for she is the epitome of Grace. I pray;
Father God grant us peace and comfort in this most pai...nful time, guide us thru this hurt-filled haze with the light of your love Lord and may we continue her legacy within our own lives,our own families, our Church's' and our communities, and may our memories serve as reminders that we will all be together again, according to your will Father God, I ask these things, in Jesus Holy Name, AmenRead more
View all