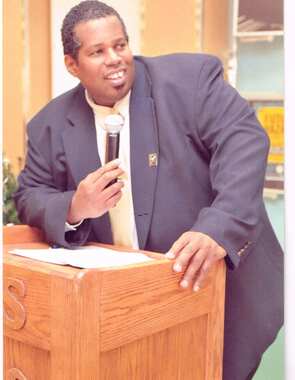 Back to James's story

James was born on October 25, 1965 in Los Angeles, California. He was the second son born to Georg Walter and Betty Allmon Willis.

James earned a Bachelor's Degree from Langston University, which was also his father's Alma Mater.

James met and married Karon Lynn Merritt while in college. From this union, two sons were born, James Britt, II and Ronald Walter Willis. After graduation, James worked at Eddie Warrior Correctional Center. [ Eddie Warrior was his Uncle ] James then later joined the staff of Oklahoma Department of Human Services, where he served as Adult Protective Services Supervisor.

He was a faithful member of Alpha Phi Alpha Fraternity, Inc., where he served as President of the Beta Chi Lambda Chapter.

After a brief illness, James transitioned from Earth to Glory from St. Francis Hospital in Tulsa, Oklahoma on December 17, 2019 at 8:34 P.M. to be reunited with his father, George Sr., and his brother, George, Jr.

He leaves to cherish his memories; his devoted and loving mother, Betty Jane Allmon Willis; his sons, James Britt, II and Ronald Walter; his Uncle, George Willis, Los Angeles, California; and a host of cousins, other relatives and friends.

You may visit James, as he slumbers in peaceful repose at the funeral home on Sunday, from 2 PM until 5 PM.

His brothers of Alpha Phi Alpha Fraternity, Inc., will render the rituals of their Memorial Ceremony of Brother Willis joining the Omega Chapter of the Fraternity, beginning Sunday at 6 PM in the St. Joseph's Catholic Church. The public is invited to attend.

A Rosary Ceremony will follow at 7 PM at St. Joseph's Catholic Church.

The Funeral Mass will be on Monday, December 30, 2019 at 10 AM in the St. Joseph's Catholic Church. Reverend Fr. Richard F. Cristler is the Celebrant.

The Christian Committal will follow the Mass in the Memorial Park Cemetery.
Published on December 27, 2019
To plant a tree in memory of James Britt Willis, Sr., please visit Tribute Store.

Plant a tree in memory
of James

A place to share condolences and memories.
The guestbook expires on March 26, 2020.

Sandy Laster
Betty, I was so sorry to hear about James. I know how devastated you must be. I’m glad you were able to get back home to spend some time with him before he passed. My sincere condolences.
Sandy Laster
Fuller Agency
View all