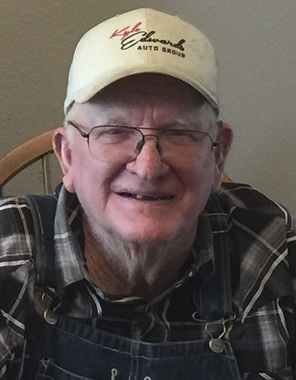 Back to Haskell's story

Haskell L. Layman, Council Hill resident, passed away on Thursday, December 5, 2019 in Muskogee, OK at the age of 80. He was born on Thursday, October 12, 1939 to Jacob Woodward Layman (Jake Layman) (1910-1985) and Otta Jontlene (Owen) Layman (1915-1998) in Hanna, OK. Haskell graduated from Checotah High School in 1958 and also earned an associate's degree from Connors State College, a bachelor's degree from Panhandle A & M College, and a master's degree from Northeastern State University. In December 1962 he married the love of his life, Leah Mae Clark; he loved his family with all of his heart. For over 25 years Haskell loved being an educator at Midway Schools where he taught industrial arts and science and served as both principal and superintendent. He also lived his commitment to young people as a volunteer 4-H leader. Coon hunting, fishing, and working were his favorite pastimes; he worked and played hard and loved to help people. Haskell was preceded in death by his parents; his brothers, Phillip Terrell Layman (1942-2006) and Olen Glenn Layman (1944-1945). He is lovingly survived by his wife Leah Mae (Clark) Layman; his daughter, Brenda Miller and her husband Billy of Hitchita; his son, Gary Layman and his wife Rhonda of Dewey; his 2 grandsons, Brandon Miller and his wife Whitney of Shawnee and Blake Miller of Tulsa; and his granddaughter, Katy Layman of Dewey. Haskell is also survived by his brother, Eugene Layman of Littleton, CO as well as several nieces, nephews, and a host of friends. Viewing will be from 2-4PM on Sunday, December 8, 2019 and from 9AM-6PM on Monday, December 9, 2019 with his family greeting friends from 4-6PM at Garrett Family Funeral Home. Services celebrating the life of Haskell will be held at 10AM on Tuesday, December 10, 2019 at Midway School new gymnasium with burial to follow at Hillabee Cemetery near Hanna.
You may share online condolences with Haskell's family at www.garrettfamilyfuneralhome.com. The family of entrusted his care, services and burial to John & Kim Garrett and the dedicated staff of Garrett Family Funeral Home & Cremation Service 311 SW 2nd Checotah, OK 74426 (918) 473-2244.
Published on December 7, 2019
To plant a tree in memory of Haskell Layman, please visit Tribute Store.

Plant a tree in memory
of Haskell

GIP AND MELISSA SOUTHERN
Our prayers go out to the family. He will be missed the int he community.
View all