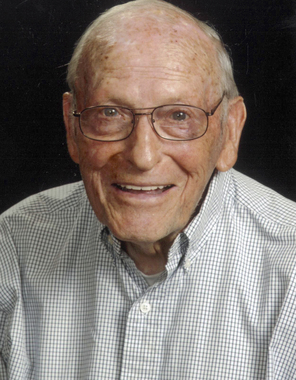 Back to Forrest's story

Forrest Lee Caldwell (Frosty), 91 of Muskogee, was born November 6, 1928 in Cedar County, MO to James and Ella Caldwell. He died Tuesday, December 24, 2019 in Muskogee, with family by his side.
Forrest was one of twelve children to James and Ella Caldwell. He attended and graduated from Nevada High School where he met the love of his life, Iva L. Hendrix. They were united in marriage on April 8, 1949 and after 60 years of marriage their love for one another never faltered. They had two children, Sandra Wood of Muskogee and Gene Caldwell of Fort Gibson. They moved their family to Muskogee on August, 1961 to open up the Karbe's/Piggly Wiggly grocery store. He retired from Walkers Grocery Store. He joined the Marine Corps on June 19, 1953 where he was ranked a Sergeant. During his service he was awarded the National Defense Service Medal. He also was the only bonded soldier to transfer Federal money. He was honorably discharged from the United States Maine Corps on December 19, 1959. In high school, he lettered in track and continued to be an active runner throughout his life. He enjoyed hunting and fishing with his grandchildren and great grandchildren. He followed his kids and grandkids to all of their sporting events and was their biggest cheerleader. He loved to refinish furniture and help his daughter, Sandy with estate sales. He also liked to help her when she had her consignment store. Forrest was a faithful member of the Church of Christ and loved his church family. Frosty never met a stranger and would talk their ears off.
Forrest was preceded in death by his wife, Iva Caldwell; his parents, James and Ella Caldwell; his siblings; his son Gene Caldwell; and son-in-law, Ron Wood.
He is survived by his daughter, Sandy Wood of the home; daughter-in-law Kay Lynn Caldwell of Ft. Gibson; eleven grandchildren, Amber Elkins, Scott Caldwell and wife Courtney, Andy Caldwell and wife Meagan, Richard Caldwell and wife Missy, Shelli Jiles and husband Michael, Shari Lewis, Shelly Hitt and husband Mike; 17 great grandchildren, Trevor Jiles and wife Lane, Allie Jiles, Peyton Burnham, Savannah Caldwell, Addison Caldwell, Ava Elkins, Mia Hauck, Mackenna Caldwell, Courtney Lewis, Jack Lewis and wife Ciara, Kay Leigh Webb and husband Jesse, Haley Hitt, Andrew Hitt, and Jake Hitt. He also leaves behind many nieces and nephews, other relatives and friends.
In lieu of flowers, the family request donations to the Muskogee War Memorial Park-USS Batfish at: https://warmemorialpark.org/.
A celebration of Forrest's life will be 10:30AM, Monday, December 30, 2019 at Fort Gibson Church of Christ with Deacon Henry Petree and Minister Dan Rouse officiating. Interment will follow at Fort Gibson National Cemetery with Andrew Caldwell, Scott Caldwell, Ricard Caldwell, Michael Jiles, Trevor Jiles and Jack Lewis serving as pallbearers. Honorary pallbearers will be Richard Steehler and Benny Garland.
Funeral services are under the direction of Cornerstone Funeral Home, 1380 N York Street, Muskogee, OK. Condolences may be made to the family online at www.cornerstoneofmuskogee.com.
Published on December 27, 2019
To plant a tree in memory of Forrest L. "Frosty" Caldwell, please visit Tribute Store.

Plant a tree in memory
of Forrest

A place to share condolences and memories.
The guestbook expires on March 26, 2020.

Don Crum
Frosty was the butcher at the Westside Piggy Wiggly when I was discharged from service in 1970. This was my first job after service. I remember him as being very friendly and laughing a lot. His wife Iva also worked there and she was also a very nice person.
Don Crum
Westside Piggy Wiggly was my first job when I was discharged from the Navy in 1970. Frosty was the butcher at the time. A nicer man could not be found. Friendly and always laughing. His wife Iva also worked there. She also was a very nice person. I'm sure they will be mussed.
Kathy (Schlegel) Neighbors
My parents and sister and I would shop at Mike's grocery whenever her and I were growing up and he would listen to you if he had time. Even if he didn't have time he would talk to on you anyways. He'll be greatly missed!!! My mom died on February 11, 2018 and dad died in 1995.
View all