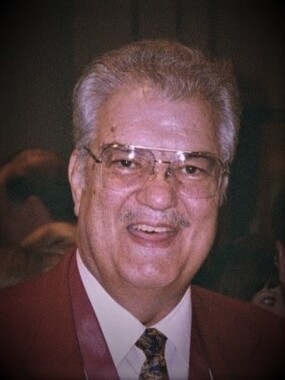 Back to Dr. Lowell's story

Dr. Lowell "Chief" Lehman, 86, of Tahlequah, Oklahoma, died Wednesday, April 10, 2019.
Born Leonard Lowell Lehman to parents Laurence and Ivy (Dent) Lehman, May 28, 1932 in Tempe, Arizona, the fourth of nine children. The family moved to Tahlequah when Lowell was in the 3rd grade. Lowell met Janelle, the love of his life, at Tahlequah High School in 1949, and they married June 1, 1954. They had 3 children: Becky in 1955, Len in 1958, and Paul in 1964.
Lowell received his BA in Education from then Northeastern State College in 1953, earned his MME from the University of Tulsa in 1960, and was very proud to complete his Doctor of Philosophy degree in Music Education from the University of Oklahoma in 1980.
Lowell could play all the brass instruments in any band. He was a first chair tuba player, stand up and electric bass player, conductor, composer, and arranger. He also played in several local and touring bands over the years.
Lowell began teaching primary and secondary school students in Anderson, Missouri, then in Muskogee, Oklahoma for several years. He went on to teach at Northeastern State University from 1966 to his retirement in 1996. At Northeastern he developed the jazz program in instrumental music, the wind ensemble, the brass choir, and increased the marching band to over 150 members. He was extremely proud to have founded the Muskogee Jazz Festival and NSU's Green Country Jazz Festival, which attracts high school and college bands from several states, has brought national acts including Count Basie, Doc Severinsen, Buddy Rich, and Woody Herman to headline over the years, and is still going strong after 50 years.
Lowell received the Governor's Arts Award from Oklahoma Governor Keating in 1999. He was inducted into the Oklahoma Higher Education Hall of Fame in 2002 and the Oklahoma Jazz Hall of Fame in 2010. He was also recognized as a Distinguished NSU Alumnus in 2010. But he was most proud of the success and of the love of so many former students on whose lives he left an indelible mark.
Lowell was a proud Mason and Shriner. He had been president of the Tulsa Chapter of the English Speaking Union and board member for several music and education organizations, including president of the student member organization of the Music Educators National Conference.
Lowell was preceded in death by his brilliant, beautiful, and loving wife, Janelle Goodwin Lehman, in 2017. He was also preceded in death by his parents, and by siblings Ivy Lys, Barbara, Larry, Dianne, and Leslie.
He is survived by his sister Jackie (Fred - deceased) Davidson, brothers Stretch (Rhonda) Head and Lyle (Brenda) Lehman, daughter Becky (Larry) Coffman, sons Len (Jin) Lehman and Paul (Kathy) Lehman, grandchildren Sam (Samantha) Lehman, Susan (Naomi) Lehman, and Leah Teng, and great-grandsons Evan and Ethan Lehman, numerous nieces, nephews, and cousins, as well as a multitude of students and friends whom he considered family.
A memorial will be held at the NSU Jazz Lab in Tahlequah, Oklahoma, at 3:00 pm on Sunday, April 28, 2019.
In lieu of flowers, please make donations in his honor to Shriners Hospitals or Save the Music Foundation. Memorial cards may be addressed to 603 SW Duke Ave, Bentonville, AR, 72712.
Published on April 22, 2019
To plant a tree in memory of Dr. Lowell "Chief" Lehman, PhD, please visit Tribute Store.

Plant a tree in memory
of Dr. Lowell

A place to share condolences and memories.
The guestbook expires on July 17, 2019.

Restore the guestbook to view the 1 more posts by family and friends, and share a memory or message of condolence of your own.