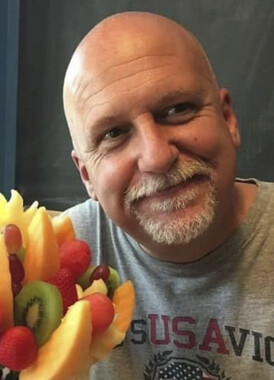 Back to Christopher's story

Christopher "Red" Lee Williams was born in Groton, Connecticut on Thursday, September 2, 1965 to Bernard and Anita (Ford) Williams. Chris passed away in Tulsa, Oklahoma on Saturday, January 4, 2020 at the age of 54.
Chris graduated from Muskogee High School and went on to earn an Associate's Degree at Oklahoma State University, Chris has a successful career as a computer programmer. Chris also served our country in the United States Army until his honorable discharge.
Chris married Melissa Duke on September 12, 1986 in Muskogee, Oklahoma. They were blessed with four daughters. Chris was a wonderful husband, father and grandfather. He adored his family and loved spending time with them.
In lieu of flowers, donations may be made to the family's Go Fund Me, entitled "Help with Funeral Costs and Moving On".
Chris is survived by his wife, Melissa Williams, children, Samantha, Sara, Rebecca and Jessica Williams, parents, Bernard and Anita Williams, sister Renea and John Saxon, brothers Joseph and Patrick and Jennifer Williams, and six nieces and nephews.
Published on January 8, 2020
To plant a tree in memory of Christopher Lee Williams, please visit Tribute Store.

Plant a tree in memory
of Christopher

A place to share condolences and memories.
The guestbook expires on April 07, 2020.

Garrett and LeAnn Huxall
Chris you will be missed. Great person Great neighbor.
Melanie Campbell
For my dear friend, Chris' mother, I know your heart aches. I feel it too. We shared a large portion of our lives but this is one event I wish we didn't have to share. I'm here for you.
Deaun dalton
Prayers for healing and comfort.
View all