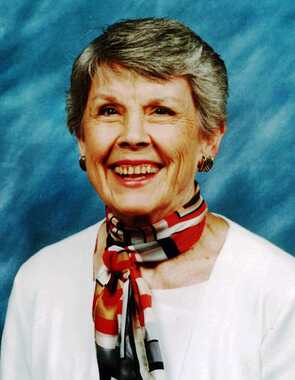 Back to Billie's story

Billie Wilson Stout, age 90, passed away peacefully on January 7, 2020 in Muskogee. She was born June 12, 1929 in Higden, Arkansas to Rev. Harold and Jewel Wilson, the first of their five children. She married Weldon W. Stout (Bill) on September 2, 1947, who preceded her in death in 1994.
Billie lived her early years on a small family farm in rural Arkansas, with her mother, father, and grandmother. She attended the small school in the area, where she proved to be an excellent student and developed her passion for learning. Everyone in the family worked hard, as was necessary during those years. Billie often spoke of those happy years on the farm, in spite of the hardships, where she learned many valuable lessons. She was a great cook, and could put together a wonderful meal at a moment's notice, with seemingly little effort. She was artistic and talented, crafting many items for her home and her family, and sewing for her daughters.
After marriage, Bill's career as a social worker for the Bureau of Indian Affairs located the family in Talihina, Baton Rouge, Louisiana, and Wewoka, Oklahoma, where Bill retired. Billie worked hard, raising the children, while Bill traveled for his job. Education was important to her. She attended Arkansas Teacher's College in Conway, Arkansas, and later East Central State University in Ada, Oklahoma. She earned both a Bachelor's and Master's degrees. She later taught first grade in Wewoka, earning the love and respect of all who knew her. She excelled in her roles as wife, mother, and teacher.
Her large extended family was very important to her. Billie loved hosting family gatherings. Every Thanksgiving for many years, her children, four brothers and their wives, and later their children, traveled to Wewoka for an extended holiday at Bill and Billie's home in Wewoka. The weekend fun always consisted of games, singing, card-playing, picture taking and viewing, and of course, feasting. It was an important time for all who attended.
Billie was an avid reader and traveler. She was seldom seen without a book. She and Bill explored the United States in their Winnebago, from Florida to the Northwest. They also traveled to Mexico, Spain, and England. After Bill's death, Billie travelled with family to Maine, Greece, Italy, and other places near and far. Having a great intellect, she loved learning about the history and culture of different countries.
Billie is survived by her brothers, David (Judy) of Amado, Arizona, Charles (Beth) of Murfreesboro, Arkansas, Joe (Charla) of DeSoto, Missouri, and Bob (Paula) of Batesville, Arkansas; her children, Nancy Flemming (Mark Staniland) of Eureka, California, Weldon (Connie) of Muskogee, Mark of Norman, Oklahoma, and Martha (Glen) Taylor of Wichita, Kansas. She also leaves behind grandchildren, Lorin and Timothy Flemming, Justin (Shelly) Stout, Kellie and Jarod (Heather) Taylor; and 5 great-great-grandchildren, Reed and Cameron Stout, Alexander Taylor, and Grayson and Augustus Flemming. She will be missed also by her many nieces and nephews.
In lieu of flowers, the family requests memorial to St. Paul United Methodist Church in Muskogee. There will be a private family burial at 2PM, Monday, January 13, at Old Hickory Cemetery in Morrilton, Arkansas.
Funeral services are under the direction of Cornerstone Funeral Home, 1830 N. York Street, Muskogee, OK. Condolences may be made to the family online at www.cornerstoneofmuskogee.com.
Published on January 10, 2020
To plant a tree in memory of Billie Stout, please visit Tribute Store.

Plant a tree in memory
of Billie

A place to share condolences and memories.
The guestbook expires on April 09, 2020.